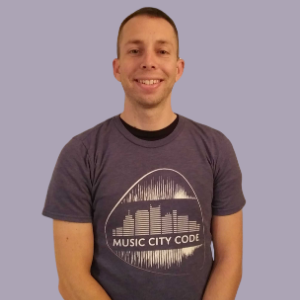 Nathan grew up in Carrollton, GA (45 minutes west of Atlanta). He started programming while in college, so software development became a natural career choice. His first job was at Greenway Health where the first bug he fixed was correcting a misspelling in a popup. After Greenway relocated to Florida in 2017, Nathan and his family moved to Nashville because of the favorable job market and professional hockey team. He lives in Franklin and enjoys trying new Nashville experiences, cheering on the Predators and Nashville SC, playing bass (rather poorly) and running.

What does a software engineer do at Contessa?

A software engineer at Contessa is responsible for managing all aspects of our in-house software, from the database to the user experience in the web browser. Our job involves lots of coding work in order to fix bugs or to add new application features, but we also lean new technologies since the tools we use for software development are constantly evolving. Our top priorities are keeping Contessa’s code modern and up to date with the latest security practices.

Why did you choose a career in software engineering?

I chose software development as a career because of the personal satisfaction I get when I’m able to use code to solve a problem efficiently and elegantly. In many ways, being a developer is similar to being a craftsman such as a carpenter or chef; the mundane day-to-day tasks that are involved (sanding wood, chopping onions) may sometimes seem boring but if the result is good (a beautiful cabinet or tasty meal) there is a sense of pride and accomplishment that is very addictive. Personally, I’ve only actually attained that level of satisfaction twice, but it is why I keep trying.

How does the work you do at Contessa differ from other software engineering jobs?

The biggest difference I’ve noticed between the software engineering position at Contessa and my other jobs is the focus we give to staying on the cutting edge of technology. Many companies make software that works but then tend to rest on their laurels a bit and suddenly your code can only be compiled by a toolchain that Microsoft dropped support for three years ago. It’s an unsettling feeling. But here, we are constantly looking at the current happenings in the software industry and evolving our application to adhere to the latest practices. That adds a bit more work, but it keeps us positioned to continue delivering useful software as technology changes around us.

What is the best part of your job?

The best part of my job is being able to throw some music on in Spotify (Rush and Muse are favorites) and figure out how to write some code to accomplish a goal. It’s like being a fan of crossword puzzles and being paid to solve crossword puzzles!

What’s the most challenging part of your job?

The most challenging part of my job when there’s a bug in the software and not only do I not know how to fix it, but I can’t even understand why it’s not working in the first place. To go back to the carpentry analogy, it’s like if you measure a gap to be 36 inches wide and you cut a board that is 36 inches long to fit in there and then it’s (seemingly) randomly two inches short. It feels like the laws of physics are conspiring against you. Usually, of course, the problem is just that you have an assumption that is erroneous and once you realize it everything makes sense again (you realize that you mismeasured and the gap is really 38 inches so physics is in fact still consistent). But until you get there it’s not a fun place to be.

What inspires you to come to work every day?

The thing that inspires me to come to work every day is both the satisfaction of doing something I really enjoy and the feeling that I’m doing it for a purpose that helps people and has a positive effect on the world. That probably sounds like generic corporate speak but I think about all the software jobs that basically just let people put mustaches on (pictures of) cats or something, and I’m glad that I am able to write software that is used to improve the care people receive when they are unwell; it has a significance that isn’t found in a lot of places.